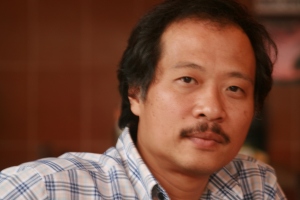 One hot afternoon in July, Ooi Kee Beng sat down at a Muslim cafe on Kandahar Street in Singapore for a cold Arabic coffee and a chat with one of Penang’s many big names in the academic world. Professor Ho Eng Seng, a Penang Free School alumnus, shared with him some of the most important lessons he had learned on his long academic journeys.

HO ENG SENG returned to Penang in 1986 from Stanford University with degrees in Anthropology and Economics. The timing was bad, however. The country was in the middle of a bad depression and there was no job to be had.

It didn’t help that his academic interests were not market-oriented. His Bachelor of Arts Honours thesis was on Baba culture. His degree in Economics was gained through a disparate collection of course he had taken at Stanford.

After six months without work, he was offered a teaching job at the Singapore Management University. He was soon working for the Government of Singapore Investment Corporation (GIC) and the Monetary Authority of Singapore (MAS).

“Singapore was forming Group Representative Constituencies then and the issue of who was what was very relevant. Who is a Malay? Who is a Chinese?” Prof Ho asked. “I went to the Arab Street area a lot. I realised that what was supposedly a Malay area was in fact an extremely complex cultural district. I discovered how cosmopolitan the Islamic world actually is! In Malaysia, one grew up with the politically correct notion that ‘Malay’ and ‘Muslim’ were one and the same thing. What a wrong and narrow view that is.

“Simply walking around the Kampung Glam area expanded my notion of ‘Malay’ or ‘Muslim’. In dissociating ‘Malay’ from ‘Muslim’, the perception of the Muslim world as a cosmopolitan and multinational place matured in my head.”

Ho began studying Arabic, and soon went on an American fellowship to the University of Chicago. While there, he continued learning Arabic.

“I had this idea that I would return to Malaysia to teach a comparative course on Muslim societies, and to show how diverse Muslim societies were. I chose to study the Hadramis. This community is highly mobile and wherever they went, they would marry locals and learn the local language. I thought the community in Kampung Glam was interesting in that although a unity, it was heterogeneous.”

Prof Ho stayed 2½ years in Yemen – where he studied even more Arabic – and then went off to India, reading literature written in Arabic about Hadramis and by Hadramis.

“Much confusion in our understanding of the region’s history comes from the mistaken notion that Malay history is about the peninsula. Seeing the complexity of things within the Muslim community gave me an aggregated view of what we consider Malay society.”

His studies of the diasporic Islamic world increased his understanding of the Malay sultanates, on which he wrote his MA thesis. The groundbreaking work done for his PhD thesis was published in 2006 as The Graves of Tarim: Genealogy and Mobility across the Indian Ocean.

“Studying trading and migrant patterns broaden one’s mind. I discovered that my own thinking was rather racial, and my studies helped me think out of the racial box. This is something quite difficult to do if one were in Malaysia.”

Much of his study of Arabic was done through the immersion method, where no other language was used as a medium. Such a method, he discovered, forced the student to think with totally new sets of categories.

Does he feel a need to revisit his starting point after his long intellectual journey?

“My BA honours was on Penang Baba culture, and my MA thesis was on Malay sultanates. So I have been studying Malaysia in different ways over and over again. My study of Arabic culture allowed me to return with new eyes. So, it is not so much that I have been away. It’s more that I have been looking at Malaysia from different directions.

“Back in Penang, I was shocked to discover that what I experienced in Singapore and elsewhere was also there, in my hometown. But I did not see it when growing up, I did not see how cosmopolitan Penang had always been, even with the groups we lazily call Chinese or Malay or Indian.

“Ethnic and cultural hybridisation never ends. Penang is still evolving in those aspects. It’s like the 19th century again. The reasons for this are many: there has been a loosening of the nationalist mindset, travel possibilities have increased after the Cold War, labour mobility has increased, economic growth is widespread, etc. There is a new vibrancy and dynamism across the region.”

What does someone who thinks like him think of the notion of nationalism?

“It’s an anathema. Nationalism is a blip on the screen, it’s a 50-year anomaly. The longer view shows that nationalism does not make any sense intellectually or culturally, especially in a maritime area. Once you think nationally, you dismiss all your connections.

“The whole focus on the Semenanjung Melayu is essentially a nationalism based on English orientalist notions of native sovereignty which  justified British ascendancy over it, and which has saddled the country with a cultural straitjacket. This has put us in a defensive position.

“For example, the Sejarah Melayu has in its origins in Alexander the Great. In India, he conquers the local king and marries a princess. He then leaves, turns up in Sumatra and marries the daughter of the local king there. Again, the local princess and a universal king are combined.

“This model of combining a universal or international power with a local sovereign is the essence of Malay sovereignty, which has reserved a place for the outsider in the internal constitution. That is the true formulation of Malay sovereignty found in the Sejarah Melayu.

“Dual sovereignty is found throughout the political structure of the region. The story of Alexander is reflected in the notion of descendants of the prophet having a special position in the Malay world. For example, the Sultan of Perlis, until recently Malaysia’s Agung, is a Hadrami descendant. We see the Arabic line coming to represent Malay sovereignty. This is an essential issue in the region — an international, cosmopolitan and universal element combines with the local element to exercise power.

“This is an old Malay pattern. This duality includes also actors from China, such as Zheng He. The Malay world harnesses this duality and complexity, and makes use of it. Multi-ethnicity marks administrations and royal houses throughout the region.”

Although not a historian, Prof Ho’s work is grounded in historical research. History, he feels, provides one with a broad range of possibilities. This concerns both time and space, and helps one break away from the narrow confines of received notions.

Where does he see his intellectual journey leading from here?

“Well, I am interested in the Mediterranean. I would like to take a closer look at the history of Venice; its place between Europe and the Islamic world. Venice and that part of Italy were one of the crucibles of capitalism, where instruments for long-distance trade developed. The city also had to deal with multiple cultures. It’s small place which has no reason to exist, and somehow because of that, it survived well.

“I think Amsterdam learned from Venice, and New York took lessons from Amsterdam and London. So you have a history of small ports which were very important in history, such as the ports of the Hanseatic League.

“Small places are interesting to look at. If you think that way, then places like Singapore and Penang come into a new light. Such places can be linked to places farther away than places in their backyard.”

Port cities, Prof Ho argues, treat inter-ethnic relations differently from how large national states do. One should think of such places, not as threats to the nation state, but as places one can learn from.

“I think going to Yemen helped to free my mind. I remember being in the US made me think in a straight line, and I would compare it to Malaysia. But after my years in Yemen, it became clear to me that history and human development are not one-dimensional.”

Prof Ho believes that it was in living intensely in a third cultural sphere that he managed to break out of the dualistic mode of thought, and much of what he has to teach stems from that experience.

One thought on “On vibrant port cities and anomalous nation states”