A Long Life Lived in Politics 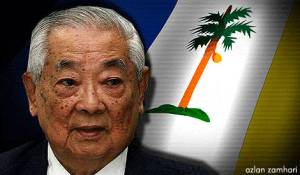 THE PASSING of Tun Dr Lim Chong Eu in November last year threw a challenge to all serious scholars of Malaysian history.

Not much has so far been written about him. No doubt most books on the country’s political history do mention episodes such as his successful challenge against Tan Cheng Lock in 1958 for the presidency of the Malayan Chinese Association (MCA), his failed attempt to gain extra seat allocations from Tunku Abdul Rahman in 1959, the triumph of the Gerakan Rakyat Malaysia in 1969, him leading the party into the Barisan Nasional in 1973, and the Penang economic miracle that he facilitated in the
1970s and 1980s. But further details are rare.

Aside from the need to uncover details, a proper analysis into Tun Dr Lim’s life is required for several weighty reasons. His political life was after all impressively long – at least 40 hectic years; and through it all, he always played a major role.

His struggles reflected in no uncertain terms major interrelated dimensions of Malaysian politics which are as relevant today as they had ever been.

For one thing, the complications surrounding an electoral system that was put in place only when colonialism was no longer a viable option, and which had to evolve under great pressure from British haste to withdraw, inter-ethnic tensions and the communist insurgency, were all too evident. The immature democratic culture, along with the social diversity, saw the growth of a strong tendency towards consociationalism and coalition building.

The need for Malayan leaders of that time to arrive at a quick solution that showed sufficient promise for political stability, inter-ethnic compromise and effective anti-communism saw the innovation that was the Alliance Model being triumphant.

Dr Lim was involved from the very beginning in Malaya’s electoral development, when his Penang Radical Party won the first ever municipal election ever held in the country. This was in George Town in 1951. By 1955, he had joined the MCA, and had become its president by 1958. The Alliance Model, constructed for the purpose of gaining independence, had the perpetual problem of seat allocation among its members. This was clearly seen in Dr Lim’s attempt to increase the MCA’s share. He failed, and soon had to leave the party.

Party politics in Malaysia was always a knotty affair. Just as Onn Jaafar formed the Independence of Malay Party and then Party Negara after being forced out of UMNO as new vehicles for his political career, Dr Lim was instrumental in forming the United Democratic Party and then the Gerakan after leaving the MCA. The need among small parties to form coalitions was always strong, and in 1965, the UDP joined the PAP, the PPP and the SUPP to form the Malaysia Solidarity Convention. This failed, and after the Gerakan did well in the 1969 elections, we saw Dr Lim leading it into
the Alliance coalition to form the Barisan Nasional by 1973.

Secondly, the relationship between local and national politics was always a tricky issue. The trend towards centralism was perhaps unavoidable, given the many social schisms that existed in the new country. For prominent politicians, the choice between participating at the state or the national arena was and is a perpetual quandary.

Dr Lim, for example, was asked already in August 1957 to become the first chief minister of Penang. He refused, giving the reason that his father had recently passed away, and as a good Confucian, he could not as yet accept high office. This was a valid enough reason, but critics suspected that he was aiming for higher office at the national level. There is a basis for that latter belief. The following year, he was already MCA president, and if his attempt to gain more seats for the party had not gone so horribly wrong, he would have been highly influential in national politics
after the 1959 elections.

Dr Lim’s attempt at a comeback went via unsuccessful challenges through the UDP and the MSC. However, in the 1969 elections, benefited from the leftist polls boycott, the Gerakan managed to secure the majority in Penang.

Dr Lim became chief minister of his home state, twelve years after he had first refused that position. The racial riots changed the country’s political equation seriously, and no alternative coalition was possible after 1969. Dr Lim soon took Gerakan into the federal coalition, together with the PPP and the Islamist PAS. With that decision, his political role became concentrated at the state level. Twenty years in national politics ended with him being the top politician in his home state.

The third dimension in Malaysian politics evidenced in Dr Lim’s chequered career was the struggle between communal and non-communal party politics. The Alliance consociation and its queer brand of “multiracialism” had proved to be an electoral triumph, which put great pressure on non-communal politicians to convince a communally conscious population that non-communal principles were preferable in the long run.

The multiracial route Dr Lim sought before joining the Alliance and after leaving it ended up compromised under the umbrella of the BN. Whatever his reasons for taking that path, his political arena shrank from the national to the local, his popularity would slowly diminished, and the universalist principles of the Gerakan became effectively subsumed under the communal politics of the BN.

To be sure, in the decades after 1969, the federal government undertook serious measures to curb the power of the states. The central soon overpowered the local, the communal the non-communal.

Finally, another truism revealed in Dr Lim’s experiences was the divisions within communal groups. These tended to run as deep as those between the groups. The myth of intra-ethnic unity had the vital function of sustaining inter-group divisions to suit certain agendas.

One could argue that it was this inability to unite on the part of small non-communal parties that convinced Dr Lim in the end that if he wanted anything done, he had to compromise with the communal parties, and then hope for the best.

To what extent this strategy actually worked in the long run is for future historians to ascertain.