Our Economist at the UN

Standfirst: August is the only time of year when Penang’s son, Jomo K.S., can get away from his office at the United Nations in New York. While passing through Southeast Asia, he gave talks in Penang, Kuala Lumpur and Singapore. I managed to squeeze a couple of hours out of his busy schedule, and had a good chat with him at the Mandarin Orchard. 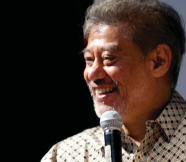 I first met Jomo K.S. in late 2004. This was also in Singapore, just after I had relocated back to the region from Europe. Having lived almost three decades on the other side of the world, it was a kick for me to meet Malaysian scholars such as him whose analysis of Malaysian political economy had helped so many, including Malaysians scholars living overseas, understand the complicated Mahathir period.

It was also with some sadness to hear then that he was leaving the region. But since he was moving to the United Nations to become Assistant Secretary General for Economic Development at its Department of Economic and Social Affairs (DESA), the news also brought pride to me. After all, the position – which he still holds – effectively makes him the chief economist at the UN.

Now, Jomo Kwame Sundram has the odd distinction of being named after two African freedom fighters – Jomo Kenyatta of Kenya (1894-1978) and Kwame Nkrumah (1909-1972) of Ghana. This was something that must have left an impression on him, if not through the names themselves, then at least through the influence of parents who would christen him thus.

Born in Penang in December 1952, Jomo attended Westlands Primary School and Penang Free School before leaving for the Royal Military College. His academic path continued impressively, and after graduating in economics from Yale College in 1973, he went on to get his masters degree in public administration the following year at the Kennedy School of Government at Harvard University. By late 1977, he had gained his Ph.D. from Harvard with a thesis titled “Class formation in Malaya: Capital, the State and Uneven Development”.

In Malaysia, he had a short stint at USM, and stayed five years at UKM before moving to UM in 1982. His academic path also saw him, among other things, being Visiting Fellow at Cambridge University (1987–88, 1991–92), Fulbright Visiting Professor at Cornell University (1993) and Visiting Senior Research Fellow at the Asia Research Institute at National University of Singapore (2004).

His huge work capacity and interest in developing social sciences in Malaysia led him to found the independent Institute of Social Analysis (INSAN). He was also president of the Malaysian Social Science Association in 1996–2000) and Convenor of the first and second International Malaysian Studies Conventions, i.e. in 1997 and 1999. The latter conference series continues as a biannual affair today.

As one would expect, someone like Jomo who is responsible for writing, editing and facilitating close to 100 books, contributing countless academic papers and commenting for the media, was bound to win awards on the one hand, and suffer lawsuits on the other. In late 1998, the professor had a defamation suit filed against him by Malaysian tycoon Vincent Tan (which was settled out of court); and he won the Wassily Leontief Prize for Advancing the Frontiers of Economic Thought in 2007.

Being employed by the UN since 2005 has meant that his involvement with other bodies has had to be toned down, due to UN regulations and a lack of time. These include the International Development Economics Associates (www.ideaswebsite.org) for which he was the founding chairman from 2001 to 2004.

Economic development affairs at the UN have always been a political hot potato, as one can imagine. According to Jomo, a deal was reached between President George Bush and Boutros Boutros-Ghali when the latter was chosen in 1991 to become UN secretary-general, to rationalise the six departments then dealing with economic development affairs into one. The following year, the Assistant Secretary-General of the UN Secretariat, Göran Ohlin, the world-renown Swedish expert on foreign aid who had been in charge of such issues since 1985, was unceremoniously fired.

Not surprisingly, the quality of research in the field declined sharply. As part of the new UN secretary-general Kofi Annan’s efforts to reform the global body, a resolution was passed in the early 2000s to turn things around. The slow wheels of the UN began moving, finally leading to Jomo being picked to lead the revival in economic development affairs.

Being seen as “chief economist” at the UN does not really appeal to Jomo. He finds it rather limiting, and prefers to see himself as “Chief Research Officer”, since he also handles social and environmental issues. Jomo’s mind has thus been immersed in global affairs over the last seven years.

“I remember coming back to Penang in 1976. I stayed only a year at USM, but felt I had to move on. One becomes a bit too comfortable in Penang, and loses touch with the rest of the country. So I moved to UKM where the personnel were young. My first boss there was Toh Kin Woon, although he left soon after I arrived.

“But especially after UKM moved to Bangi, I felt that its connections to society at large were becoming a bit tenuous. And so I moved to Universiti Malaya, and stayed for over two decades. Now, to put the record straight, it is not true that I suffered discrimination at UM. I actually chose to stay out of management, and I seldom had any big falling out with the deans or vice-chancellors. UM was the only university that had a union, and I wanted very much to remain a member of it, which I couldn’t do if I had become a member of management. On one occasion, my dean thought he was doing me a favour and made me head of department. I resigned from that within 24 hours.

“So basically, I survived at UM by not having any administrative ambitions”.

Jomo and a few colleagues began publishing the journal, Nadi Insan (“Pulse of Humanity”) in May 1979, and without any staff. The following five years working on the journal was a tough and demanding period. But since many of the articles were in Malay, Jomo improved his command of the language substantially.

But what drives Jomo?

“There are certain norms I fight for. They may be broadly called progressive, and I do not really like the term “pragmatist” because it leaves so much room for opportunism. I like to deal with the realm of the possible, with what is achievable.

“My responsibilities are very wide, covering economic, social and environmental issues. Together, they make up what the Stockholm Conference in 1972 called “sustainable development. Our latest reports have been on the wider impacts of the recent economic crisis; on poverty measurement; a macroeconomic review; and on climate change.

“One thing that the UN allows me to do outside of my regular duties is being Research Coordinator for G24, the caucus for developing countries founded through the Bretton Woods accord. I recently edited a book stemming from this, called Reforming the International Financial System for Development.

“As an academic, I didn’t have that much experience in the real world. Knowing regulations, for example, is really very important. That’s why I have recently become very appreciative of the work of Andrew Sheng, [a director of Khazanah Nasional and a member of the National Economic Action Council, whose recent book is From Asian to Global Financial Crisis: An Asian Regulator’s View of Unfettered Finance in the 1990s and 2000s]. Andrew was trained as an economist and an accountant, and worked all the time as a regulator. And he has good critical faculties.

“I have learned from a lot of people along the way. You know, Paul Krugman was my classmate at Yale. He was always a good writer, something that economists rarely are. He was a sort of star already then. Joseph E. Stiglitz was also there, the youngest professor around at that time. But he wasn’t doing things that were of interest to me back then.”

Despite his many publications, Jomo feels that books are not always the best format for spreading ideas and creating discussion. The issues he works passionately on tend not to be popular with governments, which in concrete terms means that he has trouble raising money for his projects. Where climate warming is concerned, Jomo believes that effective benchmarks have to be set, and that things must not be left to market forces.

“Nowadays, when I talk to policy-makers, I feel more understanding for how difficult it is to effect change. But nevertheless, I am very frustrated over how we have just had the greatest depression since the 1930s, and that has come and gone without real change being brought about.

“But be that as it may, I do feel optimistic. When I first got to the UN, our work was being read by a handful of foreign ministry officials. We now have new ways of dissemination, and we do engage with others who are passionate about issues.

“I try to work against a one-size-fits-all approach. For example, I managed to raise money so that we can customize one of our publications called National Development Strategies in different languages, to suit the developmental backdrop of the targeted audience.

Since Jomo had to return to the conference from which I had dislodged him, we said goodbye here, with him making me promise to send him a set of Penang Economic Monthly.