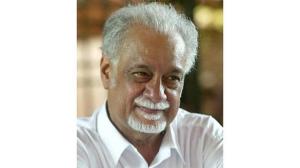 The sudden demise of opposition leader Karpal Singh in the early hours of 17 April in a traffic accident on the North-South Highway outside Kampar in Malaysia has left many Malaysians saddened.

The sadness is deepened by the thought that he had only a month ago been convicted of sedition. It also reminds many of the endless harassment that one of the most vocal advocates in Malaysia over the last four decades for the centrality of the rule of law had had to endure. The struggle to secure the rule of law as the backbone of Malaysian governance will no doubt continue after his death—just as surely as harassment of Malaysians in opposition to the government will also continue for some time yet.

Where Karpal Singh is concerned, this champion of human rights and the rule of law was respected for his bravery and for the consistency of his views. He was in many ways from a time when few doubted that good governance depended on deep respect for the law and on due process.

He should therefore be remembered as much for his belief in the law as for his bravery as an opposition leader. Playing both these roles so boldly gave him a bigger-than-life stature on the Malaysian stage, be that in court or in parliament. His knowledge and love of the law helped to limit the undermining that has been going on since the 1980s of the integrity of the judiciary and the legal profession in Malaysia.

Before 1981, all the Prime Ministers of Malaysia were lawyers, and this was for good reason. Being a leader of a modern country required that one understood the importance of the integrity of its key institutions, especially the judicial process.

In that way, we can discern a clear line between a time when the Rule of Law was considered the backbone of the country’s governance, and a time after that, when political expediencies of the powerful corrupted not only the judiciary but all the once-respected central institutions of the state.

Karpal Singh, as long-time parliamentarian, certainly helped to anchor opposition rhetoric over the years and to express the concerns of a large segment of the Malaysian population. This was important in the days when opposition parties had no hope of ever coming to power and therefore strategised and functioned as an eternal resistance; but it is ever more important now when power is actually within their grasp.

No once can really take his place, but then Malaysia has changed greatly over the last decade. His place need not be filled. The new political scene is now a very different one, and is populated by many young leaders of all races, most of whom prefer to discuss issues of governance instead of race and religion.

Karpal Singh certainly contributed greatly towards bringing such a situation into being. That will be his strongest legacy, and that is how history will no doubt remember him. As one of the most respected lawyers in the country, he was a champion of human rights, often taking on clients who were too poor to pay his fees.

In today’s context, his conviction that the Malaysian Constitution is and should always be secular is greatly appreciated. He, more than most others, stood steadfast against any attempt to put religious law before civil law. It is therefore not surprising that at the news of his death, a despicable show of schadenfreude came out of the right wing of the ruling party.

He was among the boldest of opposition leaders. As a politician, he may have compromised on matters of strategy, but on matters of law and where challenges to the secular state were concerned, he stood his ground. This was what made him a natural target of harassment for different sections of the establishment and for various Islamists.

One should also remember his important role as a father of four children. Two of them are following in his footsteps. Gobind Singh Deo is already a noted figure in the opposition camp, and is the Member of Parliament for Puchong, while Jagdeep Singh is the state representative for Dato Kramat, Penang. That is a strong legacy for any father to leave.

When I was a young court reporter in the mid-1970s, I watched him defend young and obviously impoverished people against charges of drug possession, day in and day out, in the Magistrate’s Court in Penang. He was a formidable man already back then, respected for his eloquence, his bravery and his charisma.

Since then, his impact on Malaysian politics and Malaysian consciousness about the need to defend the judiciary against its various enemies has been tremendous. He will be sorely missed, but his struggle will not abate. His influence has gone deep enough to spread into the next generation.