On Sexism, Racism, Ageism and Other Bigotries 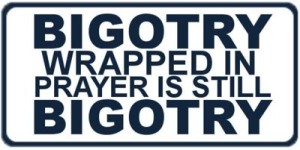 A racist act is the conscious effort by one group identity to effectively reduce the social status and the security, the rights and the privileges, and the integrity and dignity of another group identity.

The intended dynamic is two-fold, and lies firstly in the racist’s aim to reinforce a group identity, affiliation to which he or she imagines to be personally beneficial; and secondly through the unilateral conjuring of a contradistinctive group identity and the simultaneous ascription of affiliation to that prescriptively offensive group of an individual or individuals who are not to his liking. The point is to place the second at a disadvantage to the first, to imagine an asymmetrical binary.

If you don’t mind, please read the two paragraphs again. Chew on it a bit. It took me a while to formulate my point in such a way as to highlight something that is very common in human behaviour, but the effects of which can be very harmful.

Allow me this month to throw around some loose thoughts about bigotries.

The need is strong in humans to distance themselves from others in response to a need to gain an immediate sense of meaning, of orientation and of belonging, albeit at some cost to others who may be victimised in the process.

This game of inclusion and exclusion, and of personal association and dissociation, can be based on race, gender, age, class, citizenship, gang membership, geographic territory, or even surname. In nation building, for example, the processes involved are sometimes called majoritisation and minoritisation. In class differentiation, one may develop and disseminate notions of caste ethics or eugenics, or various forms of racialism.

Class bigotry took its worst form in modern times among the Khmer Rouge or the Red Guards in Mao’s Cultural Revolution. Race bigotry was at its worst in plantation slavery, Apartheid South Africa and Hitler’s Third Reich.

Sexism cuts humanity into two almost equal groups. There is no crossing that dividing line (with some few exceptions today). Women are women, and men are men – women being, in most cases, the suppressed group. Some forms of exclusivity – like in the case of sexism – may appear therefore to be more natural than others; less cerebral.

Now, cultural exclusivity, despite common notions to the contrary, is not a totally closed domain, and people do acculturate over time.

Exclusivity, then, is a mix of a conceptual binary and of positive steps taken to defend that binary. Otherwise, most things human tend to hybridise and integrate over time if left to themselves. Fluctuating boundaries are the default, the natural, if you ask me.

In that sense, politics is the struggle over how much to separate the inside from the outside. Thus, migration, be it in ethnic, class or religious terms, is an eternal issue for any political collective.

What about religions? World religions have by definition a wish to be universal. They therefore seek to absorb all into their fold. But along the way, many of their followers become impatient and exclusive. What they cannot absorb, they eradicate, with the understanding that this strategy also leads to total absorption of all living souls in the end. The dead are silent.

What about ageism, then? The binary is between the Young and the Old and is therefore more like the issue of class (not of caste though), where the rich can become poor, and the poor rich. This is unlike race and sex, where one does not become the other. However the old does not become young again; it is a one-way movement unlike the dynamics of wealth, which move in both directions.

I suppose, unlike the others, ageism – which also unlike all the other issues – is a much more modern phenomenon. It does not result as much from a group identity denouncing its opposite, than from economic competition.

Come to think of it, economics seems to underlie bigotry to a greater extent than the bigot may want to admit.

Just some musings on a serious phenomenon…