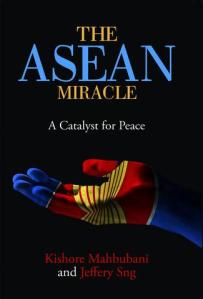 Review of “The ASEAN Miracle: A Catalyst for Peace” (Ridge Books, 2017) by Kishore Mahbubani and Jeffry Sng. In MEKONG REVIEW, May-July 2017, Volume 2, Number 3.

The Association of Southeast Asian Nations, founded on 8 August 1967, famously holds more than 1,000 meetings a year. Some say 1,400 would be a more accurate figure. Undoubtedly, a lot of time is wasted at these meetings, and a lot of vital focus that could be aimed at getting concrete results is dissipated.

How much ASEAN should have achieved since 1967 is difficult to decide, and the claim that it should have accomplished more than it has can be made of almost any institution. What is important in a discussion about how effective ASEAN is — or how effective it should be— has to do with the ontological question of what kind of creature it really is. To answer that, we must consider not only the history of ASEAN, but also the context within which the organisation evolved.

ASEAN was founded for strategic reasons by countries which at the time were anti-communist. What made ASEAN possible was the bloody destruction of the left in Indonesia. Likewise, the demise of the Soviet Union in 1991 opened the door for the Indochinese states in Southeast Asia to join the group.

As a regional body composed mainly of formerly colonised countries, ASEAN is an institution that evolved primarily as a result of the retreat of big-power confrontations from the region. Peace is thus the default condition for regional politics and the nation-building processes of these countries.

The question that needs to be asked is whether the ASEAN “miracle” is “a catalyst of peace” — the subtitle of Kishore Mahbubani’s latest book, co-authored with Jeffery Sng — or really the outcome of peace, as understood in the Cold War context.

The answer, I feel, is both. The inclusive process through which ASEAN developed made the most of the growing international armistice in the region, and by being a “talk shop”, the association managed to sustain the atmosphere of peace and avoid conflicts at the governmental level. This historically conditioned its principle of non-interference.

Some consideration should also be given to the fact that the colonialists drew boundaries to minimise conflicts among themselves; they severed many of the traditional links in the region and thus kept their different colonies separated from each other. The South China Sea was brought into historical and strategic contention after the Japanese navy exercised full control over it during the Pacific War, and it is the area in the region that is most contested today, being strategically frontier and pioneer territory.

The history of the post-colonial countries and the distinct patterns that each of their struggles for independence followed put them on dissimilar trajectories. What ASEAN allows, through being founded so early and through its principle of regional neutrality (expressed in its Treaty of Amity and Cooperation in Southeast Asia), is sufficient space for these countries to be nationalist and regionalist at the same time.

This peaceful and hopeful convergence of countries newly freed from external masters in a region seemingly of less interest to big powers amounts in effect to a collective strategy of resistance to the return of big power politics to the region. This is showcased by the declaration signed in Kuala Lumpur in 1971 calling for Southeast Asia to be a “Zone of Peace, Freedom and Neutrality” and a “Nuclear Weapon-Free Zone”. External parties seeking close collaboration with ASEAN are encouraged to sign the Treaty of Amity and Cooperation. China and India were the first to do so, in 2003, while the United States acceded to it in July 2009 as part of its “pivot” to the region. By 2016, a total of twenty-four external countries had come on board.

Although the association has no system of collective security to ensure compliance with its principles of mutual respect and cooperation, ASEAN showcases better than any other organisation that simple cordial meetings do yield results. These results are often brushed aside because they are undramatic, but they are profound nevertheless. As Kishore and Sng write:

“There can be no doubt that the ASEAN gatherings have altered the chemistry of relations among the great powers and, as a result, helped to diminish rivalry and enhance cooperation among them. If this was ASEAN’s sole achievement after fifty years, it would be sufficient to prove that ASEAN was a truly valuable regional organisation and fully deserving of the Nobel Peace Prize.”

When Indonesia, Malaysia, Singapore, the Philippines and Thailand signed ASEAN into being in Bangkok in 1967, little did they know that they were framing the future of regional cooperation for all the countries located between China, India, Australia and the Pacific Ocean, including those that were not yet members and were ideological enemies. It would take more than thirty years before the last member joined, in 1999. Since then, a new country, East Timor, has requested membership.

Brunei joined ASEAN on becoming independent in 1984. But it was only with the end of the Cold War and with communism in East Asia turning capitalist that ASEAN extended its collaboration beyond security to include economics. Vietnam, which began its doi moi (renovation) reform in December 1986, joined in 1995, Laos and Myanmar in 1997 and Cambodia in 1999.

Policy thinking throughout East Asia now focussed on identifying lucrative roles in global production chains, on building institutions that met the demands of international trade and finance and on developing collectively beneficial practices. This is now the rationale for regionalism as a peacekeeping and prosperity-bringing process.

As noted in The ASEAN Miracle, ideas of economic integration were discussed more and more seriously, and concrete measures put in place. We now have, since December 2015, an ASEAN Economic Community — more nominal than effective perhaps, but still a milestone. Whether it is worth a Nobel Peace Prize, as the book claims, is another question.

The book, marking the association’s fiftieth anniversary this year, provides three “bold” recommendations. One is that ownership of ASEAN should shift from governments to the people, and that the foremost method to achieve this, apart from the economic dynamics already moving in that direction, is “to embed ASEAN into the curricula of national education systems”. A second is to expand the Secretariat so that it reflects the increased importance of the organisation in the foreign policies of member states; the principle that all members contribute the same amount to running the secretariat limits its ability to grow. Unlike the first two, which are matters ASEAN itself needs to consider, the third recommendation, that ASEAN be promoted “as a new beacon for humanity”, may require that the organisation be studied ahistorically and outside its peculiar geopolitical setting, as the technical implementation of a model.
In Southeast Asian countries, the belief that nation building projects must be connected to larger economies stays firm. Given how insecure small countries can feel, ASEAN has been successful as their shield against unwanted external intrusions.

This success had prerequisites, foremost of which is the limited but sufficient interest in the region shown by the big powers. As a political buffer between them and a forum for them to discuss their differences, the region could aspire to be a zone of neutrality and peace while growing economically and maturing politically.

Membership in ASEAN seldom stops anyone from pursuing other paths in foreign relations and trade. But the lure of bilateralism may overshadow the less obvious long-term advantages of regionalist cohesion. As with all big powers, China favours bilateralism when it can, and settles for multilateralism when it has to.

With a membership of ten, the cultural, political and strategic interests embedded within ASEAN have become very diverse. But as long as big-power neighbours are not intrusive, these differences have not been significant. However, recent global dynamics threaten to change that. Now it would appear that members need either to stick together more than ever, or amend the organisation’s practices to prevent internal disagreements from leading to paralysis.

The temptation for weaker Southeast Asian countries to break ranks, fuelled by the idea that more advantages will accrue to those who do so first, will grow as outside pressure mounts. This is the greatest threat facing ASEAN today. It needs to engage China at various levels. It also needs to steer the Asian power’s influence by providing Beijing with a better understanding of ASEAN’s founding history and its evolutionary path.

The ASEAN Miracle may be criticised for blowing the association’s horn a little too loudly. The miracle, like all miracles, is the work of humble hands, wise timing and good luck — “geopolitical luck”, as the book calls it. Calling ASEAN a miracle may be overselling the organisation’s success, but by making the point, the book does give cause to reconsider what Southeast Asia is, ontologically, and what ASEAN is, strategically. ☐