A general over a hesitant army 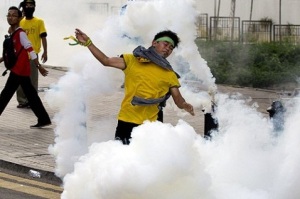 And so the third Bersih rally has taken place. It cannot be understood in isolation from the political dynamics of the last few years.

The demonstration itself went well, with tens of thousands of Malaysians taking to the streets, many dressed in the yellow T-shirt that has come to signify the nation-wide demand for electoral reforms.

No violence had occurred by the time the organisers, led by former Law Council chairman Ambiga Sreenevasan, told demonstrators at around 2pm to disperse, having achieved the show of strength the movement had wished for to back its call to Prime Minister Najib Razak to ensure that the coming General Election would be free and fair.

Exactly how violence between the riot police and demonstrators began is not clear. Rumours that agent provocateurs were responsible have been spreading.

Whatever the case, the huge April 28 demonstration poses a serious challenge to the Barisan Nasional government, especially since the event received big support from similar rallies held simultaneously throughout the country and by Malaysians in dozens of cities throughout the world.

As the Bersih movement developed from being an initiative thought up by opposition parties in mid-2005 to a civil-society organisation come July last year, the government has, for the most part, played a reactive role.

Since taking power in April 2009, Mr Najib has initiated many reforms – the most noteworthy being the recent repeal of the Internal Security Act (ISA) of 1960 that had allowed for unlimited detention without trial.

His personal popularity grew impressively as a result but, strangely, without the coalition that he leads gaining much from it.

The problem for him is one of credibility. His predecessor, Mr Abdullah Badawi, was correctly advised in 2005 when he formed an independent commission to help him reform the police establishment. The hopes he raised then were dashed when he had to beat a retreat on that initiative and on many of his reforms.

Mr Najib learned from this and took his time to work out reforms that could be carried out. He avoided using the ISA during his time in power, but he also avoided trying to reform the police.

The result of his premiership so far is somewhat mixed. Not only did his reforms not go far enough and not only did they come a little late, he could not convince voters that his coalition was behind him. He became a general over a hesitant army.

It is given the complete absence of police reforms that the violence involving the police in Bersih 2.0 and Bersih 3.0 is most significant.

The question being asked is: If the executive is not reformed, then what significant good will the repeal of old laws bring?

POINTS FOR EFFORT, NOT EFFECT

Sadly, Mr Najib has been allowing the right wing of his party to be actively and publicly provocative on issues of religion and race – something that has undermined his concept of 1Malaysia.

This is even as major allies such as the Malaysian Chinese Association, the Malaysian Indian Congress and Parti Gerakan Rakyat Malaysia have failed to carry out any noteworthy ideological or strategic changes that could win back votes for them.

It explains why Mr Najib is gaining points for effort, but not for effect. He is indeed caught between a rock – his party hardliners, who seem to include his own deputy, Mr Muhyiddin Yassin – and a hard place – the obvious need for reforms.

All this looms against a backdrop of budgetary issues, made worse by his inability to reduce subsidies and to implement goods and services taxes, and by the generous handouts to woo voters.

In short, what has been unfolding in Malaysia over the last few years is actually a race between, on one side, a government run by a Prime Minister trying to win back votes without tweaking the establishment too radically, and who has thus been pulling punches where his reforms are concerned; and on the other, an opposition that is trying to rouse the population – particularly first-time voters – to political engagement.

VIOLENCE DID NEITHER SIDE GOOD

The opposition’s best bet to win federal power is for it to fuel the sense of empowerment among young and not-so-young Malaysians.

Rallies like Bersih 3.0 are effective tools in that context. And the more peacefully such demonstrations are carried out, the more political activism will be generated.

In light of this, the violence on Saturday was unexpected and did no good for either side.

No doubt, Mr Najib has had to move carefully in formulating his reform measures, especially given the weakness of his own political position. But he is certainly running out of time.

And should he fail to gain ground for the Barisan Nasional in the 13th General Election, that number might well prove to be an unlucky one for him.

3 thoughts on “A general over a hesitant army”