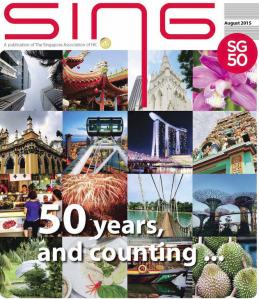 This tiny nation may be heavy-handed at times, but many laud it adaptive, responsive, progressive and even creative. Ooi Kee Beng examines the paradox that is Singapore, and why it has been so successful the last 50 years.

Today, August 9, marks the 50th anniversary of the birth of Singapore as an independent nation. It’s very existence is fascinating, not to mention its phenomenally successful political economy.

For starters, this is a city state existing in a time of nation states. Its population has an English-speaking Chinese majority living in the midst of a Muslim Malay-speaking world. It is the hub for a multitude of key activities but has no hinterland to speak of, or to draw upon. It is located in a part of the world that had always been peripheral to world history and yet it styles itself a global city.

While the little country’s government is heavy-handed in many areas, it is adaptive in others. While pro-active and pragmatic, it sees itself as conservative. While authoritarian, it is proudly responsive. It likes to control social spontaneity, and in quick at damage control where it has failed to foresee a problem.

How do we explain this? This is not a normal country; and is it therefore reasonable to ask the question, “Will Singapore — the seemingly anomalous Singapore—survive?” Or is it more cogent to consider this strange place as a harbinger of things to come in the Asia Pacific region? After all, it is often argued that post-Mao China had constantly been learning from the thoughts of Lee Kuan Yew.

Innovative as it still is, Singapore’s own future is nevertheless likely to continue being decided in large part by the colonial past on which its present economic success is based.

Caught up so tightly in the world economy as it is, understanding Singapore reveals much about what the world order is like; and also what it is likely to be. The common account of Singapore as a tiny province that separated from the Federation of Malaysia in 1965, holds serious misapprehensions about this island state. It is unique, yes, but in what ways is it anomalous? That is a key question. How can it succeed so well if it is anomalous?

Singapore after the World War II may not have had natural resources; it may have had to deal with strong feelings of anti-colonial nationalism that was pervading the whole Third World; and it may have been saddled with a retreating colonial master distracted by the Cold War and socio-economic problems back home; but it had one thing going in its favour—its insurpassable geostrategic location within the world order.

Singapore’s leaders were clear-eyed enough to understand this, and once separated from Malaysia, this insight became its lifeline.
And so it came to describe itself as The Global City—suggesting a country very open to the world in many ways but that had to be managed so that nationalistic tendencies would not destroy its great comparative advantage.

Convinced that economic success was the necessary requirement for effective nation building, Singapore pursued policies that fused it ever deeper into global growth processes. To do that, it had to imagine itself in paradoxical ways.

• It is a global city (located in a definite place but functioning as a hub for global activities flowing in and out of the immediate region).
• It is symbolised by a Merlion (a mythical creature born of both land and sea).
• It has the largest proportion in the world of non-citizens residing within its shores (almost 40%, excluding tourists, which numbered 15.1 million for the whole year of 2014).
• 75% of its population is Chinese but living under a flag with a crescent in it reminiscent of Islam.
• Its working language is English whilst its national anthem is sung in Malay …

This is just a taste of the paradoxes the Singapore Story has generated. The list can be made much longer. It is East, and it is West…and it is neither.

It has a citizen housing programme that ranks Singapore as having the highest home ownership in the world, yet this very programme is often criticised by its citizens as a sophisticated tool for social control. Singapore is a world of migrants and yet its society is beginning to show xenophobic tendencies.

Where foreign relations are concerned, its diplomatic prowess has been phenomenally successful. It has persevered at becoming a new people identifying themselves as “Singaporeans”, and have succeeded in dampening old markers of ethnicity as much as it can. China’s insistence that it is a Cihnese country is denied.

All in all, what we discern is a remarkable mix of pragmatic prowess and conservative caution. It is a land riddled with paradoxes, and the most surprising of these is that it is all that despite being a strict bureaucratic, legalistic and highly rationalised society.

¬– The author is the Deputy Director of the Institute of Southeast Asian Studies, Singapore. He is the author of “In Lieu of Ideology: An Intelletual History of Goh Keng Swee” (2010).